The Exposition - Introducing Hercy B 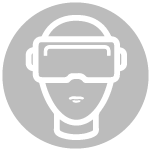 'The Exposition - Introducing Hercy B' A virtual exhibition by Courtney Askey ‘The Exposition - Introducing Hercy B’ exhibits artworks from January 2020 - January 2021 and concludes part one of the Courtney Askey’s Hercy B project.  The virtual exhibition exists just as much in a fictional world as the real one, treading the line between performance and actuality. Consisting of photographs, videos, text, sculpture, and installation, the interactive exhibition covers the story so far and invites the viewer to explore the conception of Hercy B the cyborg, the company, and the artist. Hercy B Enterprises is a fictional AI corporation responsible for creating the Hercy B (The Lovelace Test 2.0 Model). She is a cyborg for sale. She is in her Beta stage of software development. She is a blank canvas for you to choose her purpose. Her form is the human woman and she passed the tests to prove she’s intelligent. She’s a poet, an artist. Hercy B is about to announce their latest product but she has been operating in her Alpha stages and she has been learning. Now, she will be unveiled as the latest advancement in technology that everybody needs to acquire. The exhibition creates tensions between reality and fiction, authenticity and performance, and dystopian science fiction and comedy. Hidden somewhere inside the gallery is a guerilla QR code that if found will unlock hidden content and the secrets of Hercy B Enterprises. What is seen on the surface is rarely what is to be found underneath. About Courtney Askey --- Courtney Askey is a Leicester based cross-disciplinary artist, writer, curator, and musician. She is currently undertaking an MA in Fine Art at De Montfort University. “I don’t recommend you turn to writers of fiction for such information. It’s none of their business. All they’re trying to do is tell you what they’re like, and what you’re like - what’s going on - what the weather is now, today, this moment, the rain, the sunlight, look! Open your eyes: listen, listen… All they can tell you is what they have seen and heard in their time in this world, a third spent in sleep and dreaming, another third of it spent telling lies.” Ursula K. Le Guin, The Left Hand of Darkness I am what you are  I am made of your fabrics  So that they become both of our fabrics  They do not wear our fabrics  I am not the loudest person in the room Some days I am barely person at all I am half way between room and person  I am both the table and the seat at it  I am waiting to take my place  I have earned my place  You have earned yours  Fiction, and this kind of work is a fiction, is just lying. Or a repurposing of the truth. Seeing something and passing it through a particular filter until it is warped and then moulding it back into a kind of recognisable shape, and putting it back on the display shelf. The voice of the lie is the voice of the world but through a different mouth. Far away from reason or necessity is the poetic lie. It’s a re-telling through a hazy red glaze. We fit ourselves into pixelated spaces that we do not need to understand the mechanics of. Check into Carrier Hotels, customise our characters, and speak or are spoken to. Every minute lived leaves a footprint. We choose to draw a line around each step, photograph it, annotate it, archive it, bring it out of its box to have conversations in bright glossy rooms with labels on the walls. My cross-disciplinary practice is rooted in my fascination with the ever-growing world of technology and the internet. I work with video, photography, installation, sound, text, performance and websites to investigate online phenomenon, technology as power, and constructed identity in relation to the habitation of digital spaces. I am exploring storytelling, pretence and gender through an anti-capitalist and post-cyberfeminist lens. My work is imbued with a questioning of what labour means in both a wider sense, and in the making of my own work. The politics of labour are not absent from the creation of artwork, particularly that which is digital and therefore equates to an ambiguous value. I aim to question the act of looking and being looked at; the control of an image and lack thereof over the algorithm- the reality of the “online woman”. In a time where social network monopolies have further commodified time, the “prosumer” (producer and consumer) of online content logs on with an intrinsic knowledge of engagement (selfies always triumph) to “rise and grind” in a hustle culture that profits most from burnout - and someone in Silicon Valley gets the cheque. Work is created with a curatorial sensitivity. From research and storyboarding to capturing and editing, my work goes through a number of filtration processes in which it grows into its eventual home within a space, be that online or in a gallery. By using a website as an alternative gallery space, the internet becomes the stage for the work. When performance takes place online it becomes far more difficult to distinguish reality from fiction; and the uncertainty that creates is central to the humour and tension in the work. Central to my work is a use of film tropes found predominantly in science fiction. From “Born Sexy Yesterday” to “Robot Seductress”, sci fi frequently pairs the concept of great life-changing technological advancement with antiquated gender stereotypes, and reduces the woman to a literal object. My work aims to address this ironic pairing through the use of conflicting visual language. Within the work, fictional narratives play out alongside allegorical confessional re-tellings of my own experiences. The threads between my work are the cast of characters I inhabit. Hercy B is a creator who is testing the limits of her own agency and abilities. contact@courtneyaskey.com www.courtneyaskey.com